I’d been anxiously awaiting, for some time now, the publication of Mel Y. Chen’s book Animacies, the newest addition to the Perverse Modernities series from Duke University Press. In the book, Chen discusses the idea of “animacy” as it relates to race, dis/ability, queerness, the human/animal divide, and a whole host of other topics, and manages to come up with some pretty wonderful stuff in terms of theory. In becoming excited about the book, I was thinking through some of the reasons why the topic of animacy seems so exciting to me and my work (other than, well, animacy is, in some ways, excitement itself).

A very common plot device in children’s literature is less-than-animated things becoming animated. You know the drill: “really useful” engines, self-aware appliances, talking animals. Even the idea of the dead becoming re-animated comes from folklore and fairy tales we, in the current moment, often associate with youth. The granddaddy of all children’s literature animacies, though, is toys coming to life.

As I’m trying to wrap up a project on gendered racializations and deviance in a couple of LGBTQ teen novels, I’ve begun thinking how I might put Chen’s work in conversation with the wealth of children’s texts that feature toys “coming to life” as well as other work on similar themes. (I’m thinking of Ngai’s racialized affect of “animatedness” in Ugly Feelings, Halberstam’s work on “Pixarvolt” films, and the question of “what it’s like to be a thing” that Bogost asks in Alien Phenomenology.) I’m particularly interested in the idea of toys becoming animated (as opposed to being always-already animated, and being really good at hiding it, à la Toy Story). What are the implications of that process? Especially since that process usually involves a great deal of control from a human (child) actor?

Toys are also fun to think about in children’s literature, because they often allow for more free expressions of the divisions we think of as so natural in humans, gender in particular. Toys are for playing with; when we tell stories about toys, we are also allowed to play with our notions of gender, race, and class in ways we often can’t in stories about people. (Of course, it’s hard to think about a pile of alphabet blocks as having a race, gender, or sexuality.) Take for example, the familiar Mrs. Nesbitt scene from Toy Story. Even among such profoundly gendered toys as Buzz and Woody, Buzz is naturally able to take up the post of Mrs. Nesbitt under the care of Andy’s sister. Buzz in drag is able to believably become Mrs. Nesbitt at his tea party in a way that a human child would never be able to. Even though Woody polices Buzz back into his “real” gender, Buzz, for a time, becomes Mrs. Nesbitt so much that he refuses to re-become Buzz. 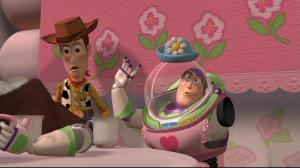 Although they’re not actually toys, we find the same sorts of things going on in one of my childhood favorites: the film for The Brave Little Toaster. (Did you know that the title character is gendered as female?) Based on a novella by Thomas Disch, the film traces the attempts of five household appliances–a lamp, a vacuum, a radio, an electric blanket, and, of course, a toaster oven–as they leave the summer cabin where they’ve been abandoned to find “the Master.” The implications of their animation are, I think, interesting, so bear with me as I hash out a few ideas.

Even though the toaster and her friends are “animated,” it’s difficult to say whether they have anything that we could call “agency.” As a fan of Saba Mahmood’s Politics of Piety, the concept of agency itself is to me a little questionable, or at least blurry. But the appliances definitely operate within a framework in which their “lives” are bound up in the idea of serving the “Master”–their whole harrowing adventure is a quest to get back to where they belong: operating the functions they were intended to serve for the Master. There’s all sorts of Marxist and/or theological implications there, which I won’t explore in depth. I’ll just point them out and suggest that we see the same things happening when toys become animated. Toys are sometimes particularly manipulated by the people who own them, even in their animation–their ability to become animated is bound up in the will of the human agent. I’ll just insert the caution of presuming to know “what’s best” for the toys and the appliances–in the same way that Mahmood cautions against placing our own ideas of agency on others. 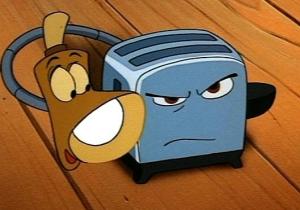 Toaster is not amused at your presumption that she has absolutely no agency.

I think, too, there are ways we can read Ngai’s concept of animatedness into The Brave Little Toaster. According to Ngai:

On one hand, animatedness points to restrictions placed on spontaneous movement and activity; in Modern Times [Charlie Chaplin film], for example, it emerges from the exclusion of all bodily motion apart from the one assigned to the assembly-line worker. On the other hand, the affect can also be read as highlighting the elasticity of the body being animated…*

Using this framework, I think we can point to the ways in which these appliances can usurp their “intended” functions and do something different. For example, Blanky is intended to be a warm covering for the Master’s body. Her “spontaneous movement and activity” is  particularly limited by the way she’s allowed to function when in the presence of the Master: When people are around, her animacy completely disappears (at least in theory). However, when the appliances are trekking through the woods, Blanky’s body is able to become something else—a tent for her friends. This kind of purposeful rescrambling reminds me of José Esteban Muñoz’s concept of “disidentification,” taking a dominant ideology and rearranging it to suit one’s own needs.

Ngai also points to the ways in which animatedness is racialized–ethnic and racial difference is often read through an exaggeration of emotive expression. I don’t think I’d be going too far out on a limb to say that the radio is racialized in the film–he “sings” Tutti Frutti at the beginning of the film, for example. For a while, one of the top-rated comments on the Youtube clip of “It’s a B-Movie” was something to the effect of “lol the radio is so gangster at 2:19.” Even more fascinating, in the context of Ngai’s work, then, is the fact that the radio has no face. His animatedness is pushed only through his vocal inflection. I wonder what we can say about the ways his animatedness is fixed. He is certainly unable to use his body in particularly expressive ways.

Anyway, this is the direction I’m starting to look at and think about–the ways that animacy and, particularly, the process of becoming animated, functions for toys in children’s books. I’m interested in looking at the ways that these things affect our conceptions of race, gender, sexuality, class, and power in general. I may or may not be placing some of my thoughts on these things here, but I just thought I’d share the things that have been bouncing around in my head for the past month or so.

I Find Myself Informed by (Blogroll):

Life, the Universe, and Salt and Pepper Sets (Perry Nodelman)